A character string type is one in which the values consist of sequences of characters.

Strings and Their Operations

Character string types could be supported directly in hardware; but in most cases, software is used to implement string storage, retrieval, and manipulation.

C and C++ use char arrays to store character strings.

C# and Ruby include string classes that are similar

to those of Java.

For character and substring references, they act very much like arrays of characters.

However, Python strings are immutable, similar to the String class objects of Java.

In F#, strings are a class.

In ML, string is a primitive immutable type.

Perl, JavaScript, Ruby, and PHP include built-in pattern-matching operations. They use Regular Expressions for pattern matching.

The length can be static and set when the string is created. Such a string is called a static length string. e.g. Java, Python.

Dynamic length strings are those strings which have varying length with no maximum. e.g. JavaScript, Perl, and the standard C++ library. 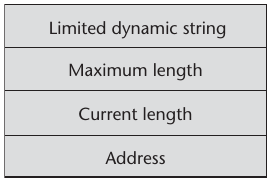 Dynamic length strings require a simpler run-time descriptor because only the current length needs to be stored.